Ask The Psychologist Issue #16: The Loss Of Freedom and Its Effects On Human Beings

(Previous issues of Ask The Psychologist can be found on the Editorial page of www.bartpbillings.com)

The last issue of Ask The Psychologist (Issue 15) discussed how **Choice Theory Psychology’s higher human psychological needs are genetically possessed by all human beings (Unless there is a genetic defect), with the need to be FREE being one of the essential needs.

People are now asking me why they are feeling so depressed and anxious by what is occurring on a daily basis in the United States. They state that the China Virus, destructive rioting and looting in major cities, increased crime and even people being extorted to contribute money to Marxist type organizations.

I heard first hand from an employee of a business owner, who received a letter from an organization stating, if she put their sign in the window of her store, her customers would feel safe shopping there. This is what the mafia did, and may still be doing to extort protection money. This is also a common practice of Marxist and Communist organizations. This person was afraid if she didn’t put their poster in the window, this organization would cause problems for her business. But if she did, the next step that this organization could take would be to ask for money, since the poster in the window is a sign that this person was intimidated.

It appears this type of intimidation is happening to larger companies as well in the United States. It’s no wonder that people are feeling that their need for freedom is being lost since they can’t do the things that they have been doing in the past. The psychological reactions  of depression, fear, anxiety and stress are normal reaction to the current abnormal situation.

A way to deal with this abnormal situation is to discuss alternative situation with family and friends and come up with multiple alternative solutions to deal with these problems. For the business woman, she needs to report this extortion to the shopping center security, the local police and possibly the FBI, seeking help in dealing with this potential threat.

But what is critical for all people who feel that they are loosing their freedom is to educate themselves as to what is going on and why it is happening. Also to appreciate living in a free country and to do everything in their power to keep their own freedom, as well as the freedom of their country. If people are doing this with family and friends, then the are meeting their psychological needs in an effective and healthy manner.

Education as to what is occurring is key to maintaining a sense of freedom and the below video from the 1960s at the bottom of this editorial is a very good educational tool one can view to understand what is again, being attempted now, as it has been attempted in the past. Just knowing that it has happened before and that others in our country have previously dealt with it is comforting. The definitions below are also informative and reveal what freedom depriving countries practice.

1: any of various economic and political theories advocating collective or governmental ownership and administration of the means of production and distribution of goods.

2a: a system of society or group living in which there is no private property.

b: a system or condition of society in which the means of production are owned and controlled by the state.

3: a stage of society in Marxist theory transitional between capitalism and communism and distinguished by unequal distribution of goods and pay according to work done.
The three main goals of socialism are 1) distribute wealth equally among the people, 2) government control of society and 3) public ownership of most land.

A theory and practice of communism developed by Lenin from doctrines of Marx. The political, economic, and social theories of Karl Marx including the belief that the struggle between social classes is a major force in history and that there should eventually be a society in which there are no classes. Lenin (22 April 1870 – 21 January 1924) was a Russian lawyer, revolutionary, and the leader of the Bolshevik party and of the October Revolution. He was the first leader of the USSR and the government that took over Russia in 1917. Lenin’s ideas became known as Leninism.

1a: a system in which goods are owned in common and are available to all as needed

b: a theory advocating elimination of private property

2 a: a doctrine based on revolutionary Marxian socialism and Marxism-Leninism that was the official ideology of the U.S.S.R.

b: a totalitarian system of government in which a single authoritarian party controls state-owned means of production

c: a final stage of society in Marxist theory in which the state has withered away and economic goods are distributed equitably

An article titled “ HOW MANY DID COMMUNIST REGIMES MURDER? By R.J. Rummel, gives an overview of how brutal Communist regimes have been in the past, with total disregard for human lives. He states, “Communism has been the greatest social engineering experiment we have ever seen. It failed utterly and in doing so it killed over 100,000,000 men, women, and children, not to mention the near 30,000,000 of its subjects that died in its often-aggressive wars and the rebellions it provoked. But there is a larger lesson to be learned from this horrendous sacrifice to one ideology. That is that no one can be trusted with power. The more power the center has to impose the beliefs of an ideological or religious elite or impose the whims of a dictator, the more likely human lives are to be sacrificed”.

What is described above is but one reason and the most important reason to support a capitalistic democracy, where people freely vote to choose what their government implements. Even when contingents of a free democracy try to push a Marxist-Communist agenda, it is good to remember what Lincoln said, “You can fool all the people some of the time, and some of the people all the time, but you cannot fool all the people all the time”.

Pease watch the complete video below. 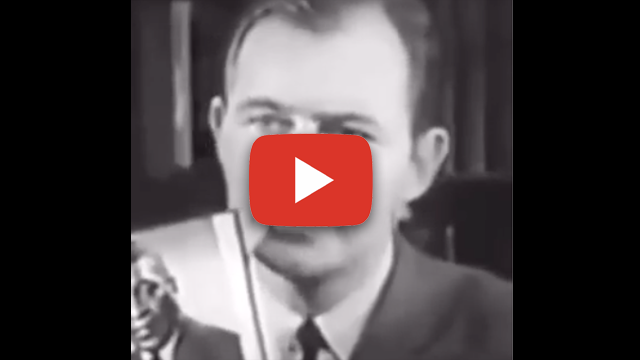 This video goes to show you that the more things change, the more they stay the same. Its like he is speaking today instead of in the 1960s. Dire warning that these people he talks about don’t ever give up.