San Diego Tribune Article – CARLSBAD: Ribs with a side of sound advice 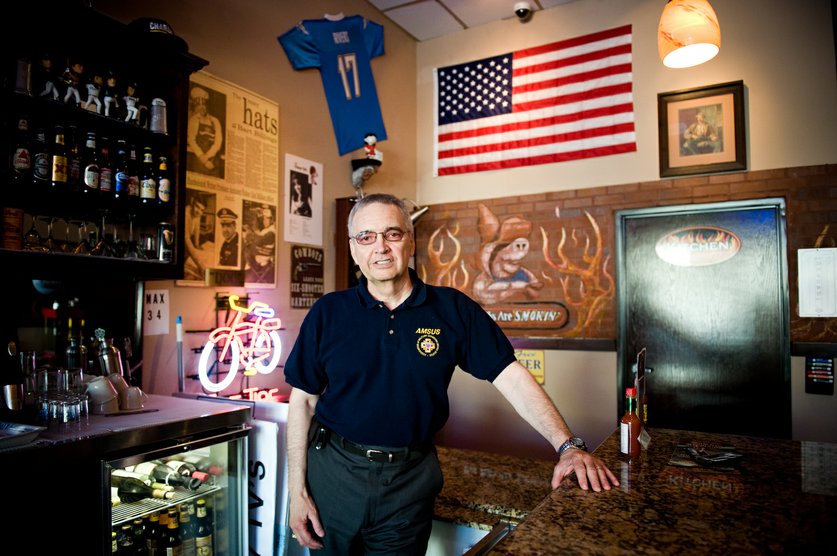 CARLSBAD —- Just inside the front door of Joey’s Smokin’ BBQ rests a sign inviting patrons to “kick off your boots and sit a spell” —- an invitation aimed squarely at cowboys, although these days, it’s more likely to refer to combat boots.

True to smokehouse form, the rib joint and saloon overlooking Aviara Parkway offers rolls of paper towels on every table and country music in the background.

Owner Bart Billings is a psychologist who specializes in post-traumatic stress, and his reputation as someone eager to help service members work through the psychological toll of combat followed him here to Joey’s.

Billings became a partner in the restaurant last year, and by April, when he assumed full control of the establishment, he said he was talking to service members about post-traumatic stress disorder four or five times a week.

He defines the nightmares and heightened nerves associated with post-traumatic or combat stress as “a normal reaction to being in an abnormal environment,” the mind’s way of coping with sustained exposure to violence and death.

“It doesn’t become a disorder until you get to a point where you’re not doing anything to normalize yourself,” Billings said Tuesday, seated in a booth at Joey’s.

Billings said some service members seek him out at the restaurant with a few questions because they heard from a friend that he specializes in combat stress. Others, who walk in unaware of his background, may ask about his collection of military hats on the wall, or the row of service banners along the east-facing patio, and end up discussing their experiences after he explains his own history in the military.

“With the music, with the ice machine, with the television on, usually the conversations are not really overheard,” Billings said. “If somebody’s a stool down, they’re not going to hear what you’re talking about. And they don’t seem to care —- I haven’t had (any)one that seemed to look around before they said anything.”

Billings’ career in treating PTSD stretches back 36 years, to the end of Vietnam. With a Ph.D. in psychology and more than three decades of active and reserve duty in the Army, he founded and runs one of the longest-running annual national conferences on combat stress. In the late ’90s, he successfully pitched the Pentagon on a system of measuring a soldier’s readiness to deploy.

Billings’ work with traumatized veterans has fostered his strong dislike of psychiatric medication and of how often it is prescribed to suppress the symptoms of post-traumatic stress.

“The military’s mental health is run by psychiatry … and psychiatry’s primary job, both in the civilian world and in the military, is to prescribe medications,” he said. “I’ve been working for the last couple of years to get Congress to hold hearings to investigate the relationship between psychiatric medications and suicide.”

In place of medication, Billings advocates “integrative treatment” using a variety of approaches, such as exercise, acupuncture and guided imagery, to coax out the causes of the stress, instead of merely addressing the symptoms.

And then there’s the stigma of discussing PTSD while still on active duty, he said.

“They’re still not talking about it —- it’s kind of like they want people to be machines and not human beings. Even though they espouse ‘We’re open, talk about your problems, you can tell us, we’ll help you’ —- it’s lip service.”

Neil Black, a longtime friend of Billings’, was 20 when he was captured in Vietnam and held for 7 1/2 years as a prisoner of war.

“The most stressful point was the initial stage of captivity, when you’re completely at the enemy’s mercy, and you don’t know whether you’re going to live or die,” said Black, adding that two decades elapsed between his release and his diagnosis with post-traumatic stress disorder.

He said his disorder manifests itself, among other symptoms, as a claustrophobic discomfort in large crowds.

“It would have been nice to know what was going on. I had no idea. I thought I was getting some sort of a physical illness the first time it happened,” Black said. “You can put icing over it with drugs, or you can handle it without drugs by staying out of certain situations that make you uneasy.”

Billings said the informal, social atmosphere of a restaurant probably encourages discussions about a topic that can be humiliating for warriors to face.

“Relationships are critical, in terms of somebody’s mental health,” he said. “You find out, when people commit homicides, even suicides, the relationship with other people is missing. It isn’t there.”

Black agreed. “I find it helpful talking about it, bringing it out in the open, keeping it transparent,” he said. “I think people get in trouble when they internalize everything. It’s a different war, but the stress is the same.”

The Tribune – San Diego – Friday April 28, 1989 – Metro North News – “The Many Hats Of Bart Billings” by Lola Sherman
(Click the image to enlarge) 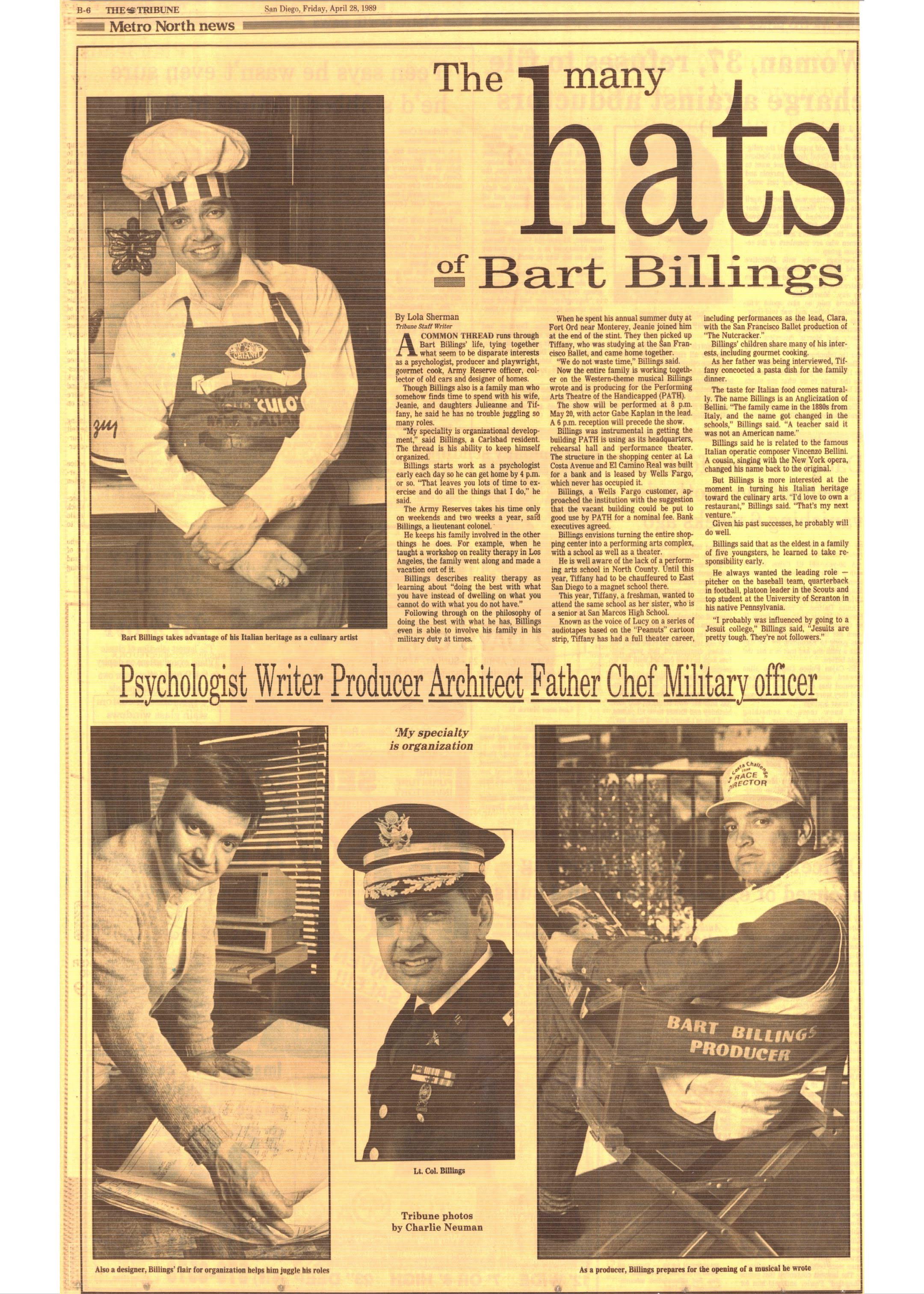 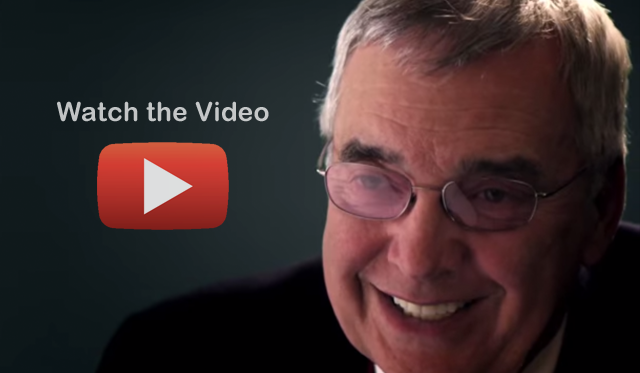